RAGS TO RIFLEMAN, THEN WHAT? 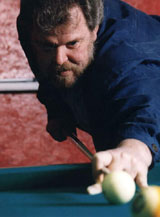 CHAPTER 15
PEORIA PAYS!  BUT, SO DOES AN INNOCENT LIFE

In 1965, news of Buddy going to Bowling Green and beating Johnny Edwards got around the pool halls of Paducah . Junior Heater and Wendell “ Cabbage ” Atkins became interested in going on the road with Buddy and Red. They figured, if Buddy could beat a player like Johnny Edwards, Buddy might run into some high dollar action and need extra backing. Recognizing the possibility of cashing in on Buddy’s stroke, they went along, willing to lend their financial support.

They traveled to Peoria, IL where one popular spot in town was a bar located on the southeast side, near the Caterpillar plant. It was big enough to accommodate a crowd of two or three hundred, and when they went inside a live band was playing.

Buddy got a $5 game of 9-ball with a pimp who had his business connected with the bar. After Buddy beat the pimp out of $20, he sent for more money. A girl, who specialized in sex care, came in and pumped the pimp’s bankroll up with $50. Buddy and the pimp played for $10 a game, and Buddy busted him again. Another girl came in and re-loaded the pimp with another 5 barrels. This time, when the pimp was busted, he called for another pimp to come and play Buddy. That pimp, in turn, went broke and called for another pimp. Buddy noticed that each new pimp played better than the one before. When all the pimps gave up, they joined forces and began calling in the pool players.

This was an amazing joint. All the players played like true gentlemen. There were never any arguments, and no one got out of line in any way. It was exciting when the pimps began rounding up good pool players and staking them against Buddy.

Almost everyone in the bar wanted to bet something on the game. The crowd was in a frenzy between games, racing back and forth, paying off and collecting bets. People were betting on the side anywhere from $5 to $100 a game each. Junior, Red and Cabbage were kept busy covering all the bets.

Buddy and his opponent never had to wait for the crowd to settle down when they started a game. By the time the players were ready for the next game, the crowd had finished their business and anxiously awaited the break shot. Buddy and his opponents were the center of attention, playing before a quiet crowd of die hard sweaters.

It was unbelievable. Girls were running in and out, re-loading the pimps with money, and hitting the door again. This went on all night. The cash flow went from the streets, to the girls, to the pimps, and finally into the pockets of Buddy and company.

Benny Paul, a gambler and big-time bookie, saw serious money circulating, and he called Jim Brock a great bar table player from Indianapolis, IN. Benny flew Brock into Peoria on the next plane, and had a cab waiting at the airport. From the time of Benny’s call, in less than three hours, Buddy and Jim were playing each other. It wasn’t long before Jim and Benny had Buddy and his stakehorses stuck $2,000.

Buddy hadn’t come this far to watch it all disappear. They had called a ringer in on him, and that caused him to start digging deep. He began stringing racks together, digging out of the hole that Brock had put him in. Before the light of morning came, the pimps, the pool players, Brock, Benny Paul, and the side betters had given up the idea of out-shooting Buddy. They had contributed over $25,000 in an effort to beat him. That was an enormous sum in the 60’s. It was more money than Buddy had ever seen in his life, and it all started with a pimp chasing a $20 bill.